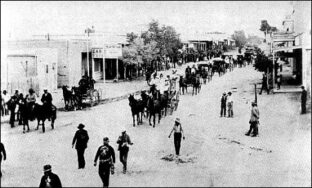 CBS started the year 1958 off with the introduction on January 1, 1958 of Frontier Gentleman. That series lasted 41 broadcasts. Near the end of the year, the network launched Have Gun, Will Travel on November 11, 1958, which continued for 106 programs. In between, a very short series was offered and discontinued after only 16 broadcasts, Luke Slaughter Of Tombstone. Sam Buffington starred as Luke Slaughter, a Civil War cavalryman who turned to cattle ranching in post war Arizona territory near Fort Huachuca. William N. Robson, known from his work with such series as Escape, Suspense and CBS Radio Workshop, directed.

Sam Buffington enacted the title role on Luke Slaughter of Tombstone, another of CBS’s prestigious adult Westerns. The series was produced and directed by William N. Robson, one of radio’s greatest dramatic directors and Robert Stanley producer was aired from February 23 through June 15, 1958. Buffington portrayed the hard-boiled cattleman with scripts overseen by Gunsmoke sound effects artist (and sometimes scriptwriter) Tom Hanley.

Each program had an authoritative opening statement: “Slaughter’s my name, Luke Slaughter. Cattle’s my business. It’s a tough business, it’s a big business. I got a big stake in it. And there’s no man west of the Rio Grande big enough to take it away from me.” Junius Matthews was heard as Slaughter’s sidekick, Wichita.