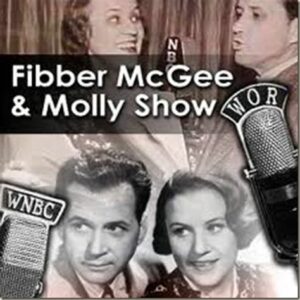 Fibber McGee and Molly was an American radio show of the old-time radio era, and one of its longest-running comedies. The series premiered on the NBC Radio Network in 1935 and remained popular until its demise in 1959, long after radio had ceased to be the dominant form of entertainment in American popular culture. The stars of the program were real-life husband James “Jim” Jordan (16 November 1896–1 April 1988) and his wife Marian Driscoll (15 April 1898–7 April 1961), who were natives of Peoria, Illinois. Jordan was the seventh of eight children born to James Edward Jordan and Mary (née Tighe) Jordan while Driscoll was the seventh and last child born to Daniel P. and Anna (née Carroll) Driscoll. Both attended the same Catholic Church, where they met, and married in 1918. They had two children, Kathryn Therese Jordan (1920-2007) and James Carroll Jordan (1923-1998), both born in Peoria.