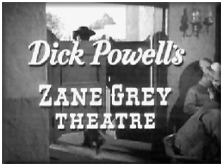 Created by Luke Short and Charles A. Wallace, Zane Grey Theatre was originally based on the short stories and novels of Western author Zane Grey, but as the episodes continued, new material was included.[1] Aaron Spelling wrote twenty Zane Grey episodes. The series opened each week with a prelude of the episode followed by the introduction, the firing of a gun, with the proclamation: “From out of the West, Dick Powell’s Zane Grey Theater.” Much of the musical score was handled by Four Star’s Herschel Burke Gilbert. Powell appeared as various characters in 15 of the 149 episodes and hosted the entire run. A half-hour program, Zane Grey Theatre debuted at 8:30 Eastern on Friday, October 5, 1956, and ran until the end of the 1960–1961 season, when Powell switched to NBC for a new hour-long anthology of drama and comedy called The Dick Powell Show.