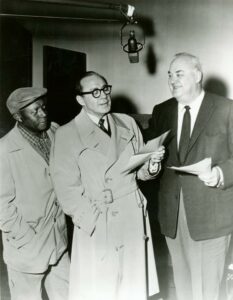 Benny had been a minor vaudeville performer before becoming a national figure with The Jack Benny Program, a weekly radio show that ran from 1932 to 1948 on NBC and from 1949 to 1955 on CBS. It was among the most highly rated programs during its run. Benny’s long radio career began on April 6, 1932, when the NBC Commercial Program Department auditioned him for the N. W. Ayer & Son agency and their client, Canada Dry, after which Bertha Brainard, head of the division, said, “We think Mr. Benny is excellent for radio and, while the audition was unassisted as far as orchestra was concerned, we believe he would make a great bet for an air program.” Recalling the experience in 1956, Benny said Ed Sullivan had invited him to guest on his program (1932), and “the agency for Canada Dry ginger ale heard me and offered me a job. With Canada Dry ginger ale as a sponsor, Benny came to radio on The Canada Dry Program, on May 2, 1932, broadcast on Mondays and Wednesdays on the NBC Blue Network, featuring George Olsen and his orchestra. After a few shows, Benny hired Harry Conn as writer. The show continued on Blue for six months until October 26, moving to CBS on October 30, now airing Thursdays and Sundays. With Ted Weems leading the band, Benny stayed on CBS until January 26, 1933,[13] when Canada Dry opted not to renew Benny’s contract after it attempted to replace Conn with Sid Silvers, who would have also gotten a co-starring role. Unlike later incarnations of the Benny show, The Canada Dry Program was primarily a musical program. Benny then appeared on The Chevrolet Program, airing on the NBC Red Network between March 17, 1933 until April 1, 1934, initially airing on Fridays (replacing Al Jolson), moving to Sunday nights in the fall. The show, which featured Benny and Livingstone alongside Frank Black’s orchestra and vocalists James Melton and (later) Frank Parker, ended after General Motors’ president insisted on a musical program. He continued with sponsor General Tire on Fridays through the end of September. The show switched networks to CBS on January 2, 1949, as part of CBS president William S. Paley’s notorious “raid” on NBC talent in 1948–49. It stayed there for the remainder of its radio run, ending on May 22, 1955. CBS aired repeat episodes from 1956 to 1958 as The Best of Benny.