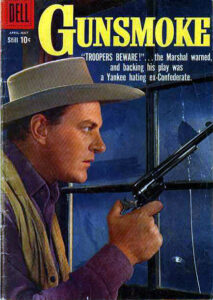 MacDonnell and Meston wanted to create a radio Western for adults, in contrast to the prevailing juvenile fare such as The Lone Ranger and The Cisco Kid. Gunsmoke was set in Dodge City, Kansas during the thriving cattle days of the 1870s. Dunning[clarify] notes, “The show drew critical acclaim for unprecedented realism.” He also writes that, among old-time radio fans, “Gunsmoke is routinely placed among the best shows of any kind and any time.” (Dunning, 304) The show’s cast, writing and sound effects have received much praise.
The radio series first aired on April 26, 1952 (“Billy the Kid,” written by Walter Newman) and ran until June 18, 1961 on CBS. It starred William Conrad as Marshal Matt Dillon; Howard McNear as the ghoulish, brittle and then, as the series progressed, kind-hearted Doc Charles Adams; Georgia Ellis as Kitty Russell; and Parley Baer as Dillon’s assistant (but not his deputy), Chester Proudfoot. (On the television series, Doc’s first name was changed to Galen, and Chester’s last name was changed to Goode.) Chester’s character had no surname until “Proudfoot” was ad libbed by Baer during an early rehearsal, while Doc Adams was named after cartoonist Charles Addams. In a 1953 interview with Time, MacDonnell declared: “Kitty is just someone Matt has to visit every once in a while. We never say it, but Kitty is a prostitute, plain and simple.” (Dunning, 304)